Having graduated with a bachelors and masters in audio and music, Mike is a well versed audio engineer, musician, and educator. From working with Grammy award winning engineers down to small start up studios, he has seen all sides of the industry, and what it takes to get the job done right. Make sure to stop by his blog Lean Audio, which covers the bare necessities and how to do audio on the cheap. From plugin reviews to heads up on free stuff, his goal is to save you time and money. Be sure to follow him on Facebook to stay up to date.

#1  Where do you place a single mic to best fill in the bass region?

The microphone is placed just above the kick drum aimed at the toms and pulled back a few feet. This technique will obviously emphasis the bass drum but if your microphone is lacking a little in the bass region then this will help to fill it in 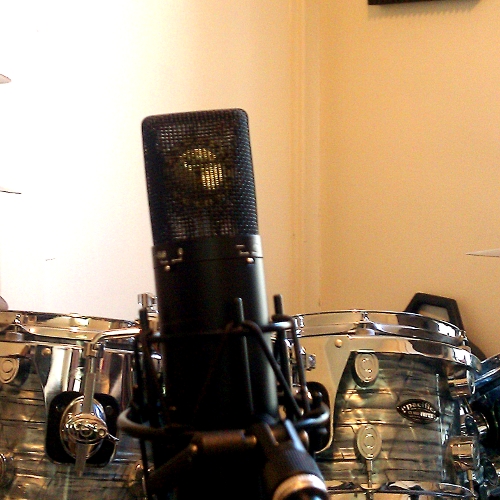 #2  Should you use a small diaphragm or a large diaphragm condenser mic?

#3 How about if i want to add more snare? more toms?

move the microphone up a little more so that it is starting to look down over the kit and move in slightly but not so much that it is actually over the drum set. This technique will give you a little more tom, cymbal and snare sound since it is looking down at the kit as oppose to straight at it 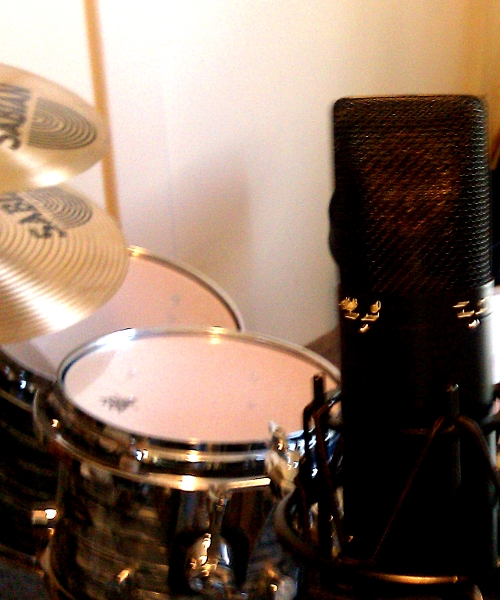 #4 What placement will allow for more attack sound?

microphone placement is going to be even higher up than the previous and actually be slightly over the set; barely over the toms to be specific. In addition you will also want to aim the microphone down a little more. This placement will give you more emphasis on the cymbals and toms and provide a more balanced sound if your microphone is balanced sounding as well.

You can of course also continue to move the microphone straight above the drum set until it’s facing down but you may end up losing some of the bottom end and full tone of the toms and get more attack.

However again the choice is yours but I do recommend choosing a mic placement that ensures a good tom and cymbal sound as we are trying to avoid having to mic every drum and micing every tom would defeat that purpose.

#5 Any good drum solos recorded in mono out there?

check out the drum seminars in Sioux Falls and more about Mark Craney’s life & career at…http://www.markcraney.org/audio-video.htm

#6  Is mono recording making a comeback?

What other great drum solos captured before stereo recording technology have been revived for a new audience?

Been Away Too Long
The Official Back Story:

Max Merritt and the Meteors

“The Highly Unlikely Result of a Life-Long Fan with a Really Crazy Idea”
by Brian Lewis, Producer, LosTraxx Records

This is the story of how a recording by a couple of teenagers in 1969 found its way into a 2012 release for one of Australasia’s most famous bands.

Back in 1969, Max Merritt and The Meteors, like many other top tier bands, used to play regularly at a Saturday night dance in the S.E Melbourne suburbs called Spectra. It ran biweekly and alternated between Waverley and Ashwood high schools, and would draw about 1,000 teenagers.

My older brother David, and some mates and I, volunteered as stage crew to help the roadies setup and breakdown, as there were often 3 or 4 bands that played each night. During sets we got to listen from anywhere in the hall, including backstage, and we didn’t have to pay to get in either. Life for teenage boys in Melbourne didn’t get much better than that in those days.

One dance night late in 1969, after we cleared it with Martin Cook, the promoter, we rigged a set of four mics – three overhead and one for the PA – and fed them into the hall’s mixing board, and then fed the mix into a mate’s reel-to-reel tape recorder. The hope was to get permission to record the bands so we would end up with a recording or two for our own enjoyment. So after my brother got face-to-face permission from Max, we rolled the tape and captured the set. Shortly after we made the recording, we had a one-off LP cut from the tape, and I have had that LP since it was made. I digitized it a few years back so I could listen to it on iTunes without tearing up the LP. As far as I knew, it was the only remaining copy of the recording we had made.

I credit my ex-wife Bonnie with the idea of releasing the Merritt recording. Her suggestion prompted me to contact my old friend Lloyd in England, who had some hands-on experience in the music business. He advised us we had great content that would make a good release, if we could find the master tape and get it digitally remastered. To me, that was a very big “IF”.

As it happened, my brother kept the master tape stored away all those years, and recently having found it, we had it digitally remastered, and that was really what kicked off the project. The quality was so good it was a no-brainer.

Between recording the set and having the tape digitally remastered, it became apparent to me that we had captured something special. As a fan, it had always bothered me that other fans didn’t have the opportunity to listen to this live set, so now I had to make sure that happened. I became a man with a mission.

As a complete outsider to the music industry, I had to put in a lot of research before I could present a plausible plan to Max and his manager. Lucky for me I am a quick study, plus my enthusiasm, and an amazing amount of support from music industry, made up for my lack of prior music industry knowledge and experience.

After I contacted Max and sent him a remastered sample for his approval, everything fell into place. If it wasn’t for my angel investor Jo, the internet tools for Indie labels – mechanical licensing by Limelight, global distribution of digital and physical music through companies like Tunecore and Amazon, economical high-tech promotional tools like Play MPE – and getting help from complete music industry strangers, whose only interest was in getting the music out to the fans, the project would never have got off the ground.

The most gratifying aspect of the project for me, from the graciousness of Max on down, there was not a single person I contacted in the course of the project that did not go out of their way to support what I was trying to do. They patiently heard me out, and helped turn my ideas into a project, and ultimately a release. I was humbled by the experience, and I am also very thankful to every one of them. I could not have done it without them. Personally, I am also extremely proud that I was able to finally get this music into the hands of Max Merritt and The Meteors fans around the world. A little late in coming maybe, but better late than never as they say!

“My ultimate hope is that fans will make this album a big retro hit, as a way to thank Max, and continue to pay him back for the 50+ years of good times he has given us all.”

#7  What’s THE most important thing to remember when recording drums with one microphone?

Graham Cochrane says place your (cardoid) condenser mike right in the middle of the kit…in front of the snare, across from Hi-Hats, in front of low toms & in front of kick drum:

#8 What new gadgets are out there to improve one mike mono recordings?

#9 How do you create a stereo room image using a mono mike recording?

To get a tight, upfront sound you have to put the mics really close to the drums

The microphone setup was a basic rock & roll approach that I learnt in The Record Plant in the ’80s, nothing too fancy.

“I used a Neumann U47 on the kick drum, putting it right inside. There were two Sennheiser MD421s on the toms, two Neumann U87s as overheads, and an Shure SM57 on the hi-hat. The snare was picked up by two SM57 mics, one above it and one underneath it, plus a Neumann KM84 on top, which gave me a good-mic/bad-mic setup: between the two you can find the ideal sound, and you can get brightness and fullness. The three snare mics all ended up on one track. The SM57 underneath the snare gave me more of the rattle of the snare drum. Especially in soul ballads the snare rattle is a really beautiful sound, but Chad plays a little too fast to use much of it. We had a second set of drums in the room, which was tuned completely differently, kind of mismatched and oversized. We used that on the track ‘Porcelain’. It had more rattle on the snare drum, and a fluffier-sounding kick drum, plus a sizzle cymbal. Because of the nature of the room there was more room for these sounds. I used microphone left-overs for that kit. I think there was an SM57 on the snare drum, an Electrovoice RE20 on the kick drum, and two RCA77 ribbon microphones as a general drum balance. I also had a pair of Neumann M50s in the room for ambience on both drum kits, but although they went to tape, I didn’t use them in the mix.”

most of it is in good old mono, and there’s hardly any reverb.

The result is a very compact, punchy sound.

We decided that we didn’t want things

suddenly blasting from the left channel on this record.

Why would we want that?

We just wanted to hear the songs.

This entry was posted in Microphone Mystique and tagged Audio Recording 101.

My Tweets
Follow music & musings on WordPress.com
Join 350 other subscribers